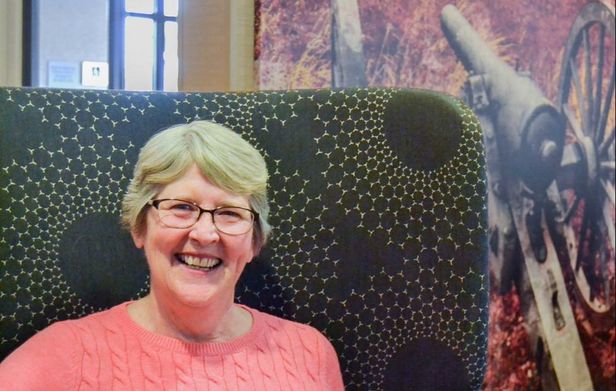 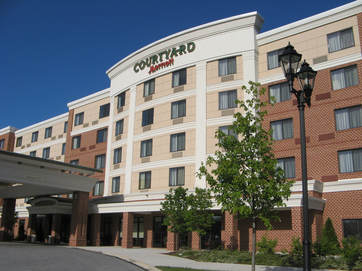 ​
In 2007, Colleen George started her career at the Courtyard by Marriott in a front desk position. Within a little under seven years, Colleen had moved up the ranks and has been working as the hotel’s sales coordinator for the last five years.

“When this hotel was built, it was new and it was exciting which is why I wanted to work here,” she said.

As Sales Coordinator, Colleen works with groups that plan on staying at the hotel. She blocks off rooms and plans their meal schedules, however, what Colleen provides goes beyond the hotel. She gets an idea of what the group wants and gives them an experience and helps plan activities.

“We have a lot of sports teams who come in to play against the college or Mount. St. Mary’s. If a basketball team is in here, I’ll get to know them and help make their stay great.”
“I’ll then go to the basketball game and it’s like “who do you cheer for?” Colleen said with a laugh. “You guys are wonderful and nice, but I think I have to cheer for the home team.”
In addition to sports teams, Colleen works with student groups and families planning reunions.

“I like working with families. I came from a large family myself, so I know it’s nice to get together and I like helping them with that,” she said.
Being an employee at a hotel in Gettysburg, tourism is a big part of Colleen’s job.

“If no one’s coming and the sales team isn’t selling, there’s no need for my job,” said Colleen.

Peak season usually starts in February for Colleen because she’s “always working one month ahead.” There’s always groups, like the sports teams, she can count on coming every year. She also sees families of college students through their school years.

“There’s parents who come stay here to see their kid in college. There was this one family, I always knew every lacrosse game they would be here,” said Colleen. “You really start to build relationships with these people. I’ll have some families come back and say their son graduated and they are just stopping back to visit.”

Due to the nature of her job, Colleen meets a lot of people, which is one of her favorite aspects of the job.

“I love the people who come through here, I find them fascinating. I enjoy talking with them, finding out what brought them here and seeing what they are interested,” she said. “There’s some people who have come here because they are interested into this one particular part of the battle, or on particular general, or we even had a lady once who was here because she was really interested in the fashion of the time and was doing research.”

To be the best she can be for her groups, Colleen maintains a personal work philosophy of being present.

According to Colleen, “Being here and doing all I can do in a timely manner, that’s what I do.”